Starting to fill our Musical Toolbox to make Tunes 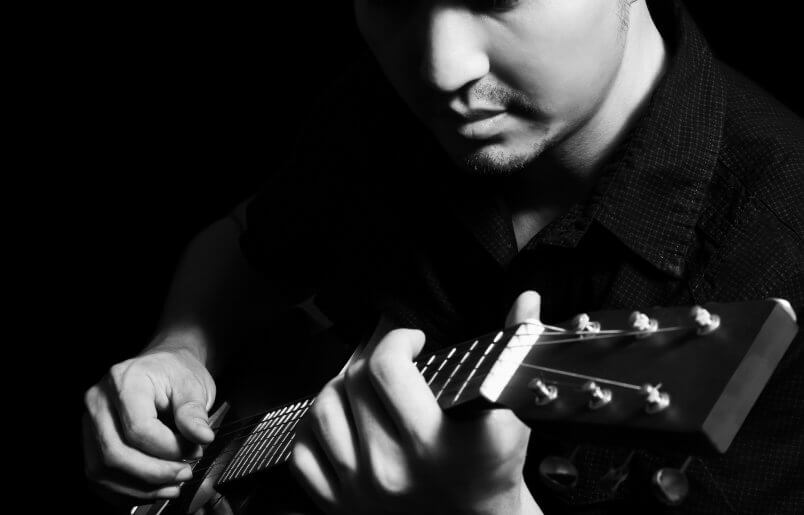 Now we’ll start adding to our musical toolbox the concepts we need for making a tune, with a particular sound flavour to it. The initial tools at our disposal are:

This lesson investigates aspects of the above, and you’ll get some ideas for how to use the resultant chords to make tuneful chord progressions.   I’ll not worry too much about rhythm or melody here (they each require a course of lessons in their own right to do them justice).  However, rhythm has such a powerful effect on our perception of music and our responses to the rhythm, that this lesson has to touch on this.  By changing the stress, start point, or duration of the same sequence of pitches this can completely alter whether we hear this sequence as belonging, or not, to the overall music.   Musicians love using this sort of stuff, to play tricks on the listener. The rhythm can powerfully change our sense of anticipation of what is coming up musically, based on what we’ve just heard.  And the rhythm can hugely influence how the music “seeps into you”, how you remember it or not, and whether you feel engaged with the music or not.

So far, you’ve learned about intervals and looked at a few in particular, and combining these into triads.  Hopefully, you’ve experimented on the emuso instrument, try putting a few major triads together, or a few minor triads,  and listened.  If you haven’t, try it now.  Grab a major triad from the Chord menu in the emuso toolkit, and CTL-left-click around a few places near where the triad first popped up.   Here’s a short example of this. I wasn’t thinking … literally just clicking.

In fact, this sort of experimentation can get you quite a long way towards a tune … and because I haven’t discussed the concepts of scales and triads found in those scales, I haven’t influenced your experimentation, nor put any ideas in your head of what you should or shouldn’t do.  You’re just … making music.  Looking for stuff that sounds good to you.

As you get into music more, you will realise that some combinations work better than others, especially for other listeners, and of course, we’ll show you these, starting in this lesson.  But all times, experiment.  It’s your choice, your music.  It can be frustrating.  It can be massive fun.  Sometimes the music can sound like you’re trying to force a square peg in a round hole, and there are simple reasons for this that you’ll learn with emuso.  We’ll show you how to make this more subtle so that peg slips right in!

Pay very close attention to what I’m telling you next … ANY note can be made to sound good against any other combination of notes.  ANY type of chord can be made to sound good in a chord progression.  Unfortunately, music theory is often misinterpreted as stating “you can only play this with that”, or “never do this” and so on.  Theory was never and is never intended for the purpose of rule setting.  Theory is purely observations made about what musical tools were commonly used, and what were typically avoided, for a given style of music created by the great composers (and more recently improvisers) of the time period being described.  Somewhere along the line,  some folk started to interpret observations as the musical ten commandments.  I’ll say again … theory is a pure observation of what tools worked well for these guys.

What you can get wrong is not dealing successfully with musical clashes when they arise, intentionally or otherwise.  Again, the way this is or isn’t handled will create different emotions in the listener.  We’ve no doubt all heard a bad singer, singing flat sometimes.  Now if he doesn’t replace that flat sounding pitch, and holds it, even screams it out, chances are someone is going to want to punch him.  Hard.  But if the flat pitch is fleeting, he’ll probably get away with … the clash hasn’t made its way into our consciousness.

Clashes can be used, very successfully, adding more colour to the tune.  This is done all the time.  So you need to know why a clash arises, and understand how to use it so the effect sounds good.

However, just because it is possible to use any note, any chord, it may not be appropriate to do so, especially where certain musical styles come laden with expectations which, if gone against, will cause you some grief with your audience.  It’s not a good idea to use a gypsy flavour of music for a texas-blues guitar solo.

Something else to be wary of, with theory books.  Bear in mind that tastes change.  I doubt that punk music of the 1980s, or Jazz bebop of the 1940s, would have been looked on favourably a few centuries ago. They didn’t even have decent guitars then!  So obviously any observations made about music from then (the classical period) would have very little to absolutely nothing to say about some modern music that we listen to and love these days.  So it would be insane to restrict our musical choices based on that … UNLESS we want to adhere faithfully to the musical style of that era.

Of course, some may argue that we have gone in reverse in terms of musical evolution.

However, it would also be insane to ignore all that has gone before and start from scratch, though music psychology would seem to imply we’d end up with same musical tools in our musical toolbox, and the same way we use these tools, at least to some level, because of our human makeup and emotional responses to music.

Have a think about what genres of music you like.  Blues?  Classical?  Folk? Electronic dance music?  Neo-classical metal?  Modern Jazz?  Country?  And so on.  This can get to be a pretty long list.  With each genre there typically comes a particular core choice of intervals that get employed, somewhere between five and seven of these, within an octave, and this interval pattern then gets scattered over one to a few octaves.

As it turns out, patterns that work well for building tunes at least include intervals of three or four semitones from the anchor, and seven semitones from the anchor.  In other words, the pattern must provide the intervals needed to build a major or minor triad from the anchor.  Why?  Because these triads are very stable sounds that the music can visit, veer away, and return to rest on.  The listener’s needs require this, to make any sense of the tune, and to engage emotions other than irritation, and to satisfy the expectations built in the listener by the music as it progresses.

The likelihood is that first example felt “wrong” at the start and end of each three-chord sequence, whereas the second example felt ok at the start and the end and kind of “odd” in the middle of each three-chord sequence. This second one has a major triad from its anchor (look closely at the clock), whereas the first one has an augmented triad from its anchor.

I used the above to show that we can (just about!) get away with some unfamiliar pattern, so long as it has (0 … 4 … 7 …) .  At least these three intervals provide a safe haven.  The same is true of (0 … 3 …7 …).  But the rest of the intervals I chose still made the some of the chords jarring, and melodies based on these would be challenging.  So now let’s head towards safer ground … the major scale.

In Western music (apart from Jazz), we only find a handful of patterns of seven different intervals within an octave, that are incredibly commonly used for tunes.

The granddaddy of them all is the interval pattern of (0, 2, 4, 5, 7, 9 and 11)  semitones, given the name major for short.  When someone talks about the C major scale, for example, she means the anchor is fixed at C for applying the pattern.   The important point is that the major scale, as any interval pattern, can be moved anywhere … as long as the same set of intervals is maintained, we still have the major scale, regardless of where we decide to nail it down.

Try this next example.  Just CTL-left-click, or left-drag, to move the scale around.  Notice the following:

Next, try clicking on the pitch button showing under the interval strip, to expand the pitch strip.  Click on a pitch name of your choice.  The major scale relocates so its anchor coincides with the pitch of that name on the piano.

We have our interval pattern, the major scale.  Now we want to build chords out of selections of intervals from within that pattern.  For this, I’ll use the clock so you can see the method in action.  It’s very simple…

The chosen pitches are our chord, with its root being the first pitch chosen.
Here is a short video of this method in use.
The result of choose-skip gives the following triads:

Let’s see and hear these in chord progressions.  I’ll use both piano and guitar.  You’ll notice, when it comes to the guitar, that some of the intervals in the triad occur in more than one octave (you’ll see the same label and colour in a few places),  whereas on a piano you won’t.    For now, I just want you to recognise that the triads from the scale are being created at the various distances from the anchor, with the appropriate interval pattern of (0, 4, 7) or (0, 3, 7).  This is very easy to see on piano, and harder on guitar, due to the added complication of having 6 strings.  Check it out

The next lesson will look specifically at the guitar.