Fed up with the same old pentatonic licks? Check out how to easily spice them up! 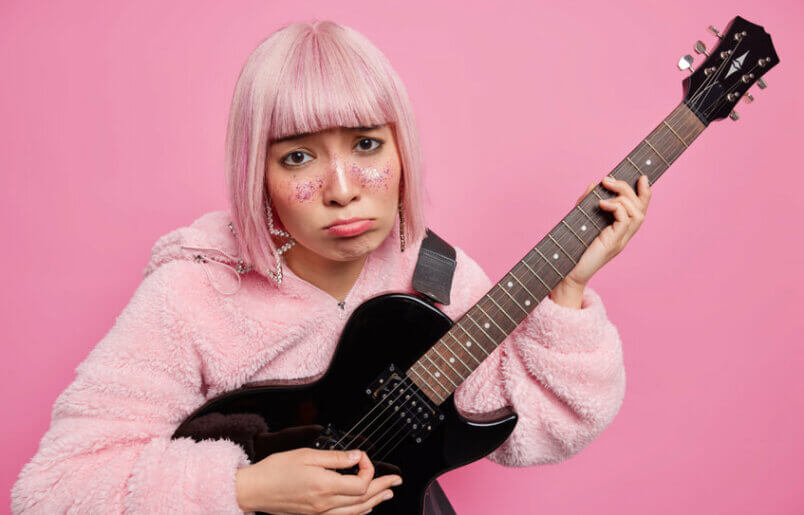 Getting fed up with the same old pentatonic licks?  Want to know a simple way to add some spice so your friends are drooling?  Here you will learn about using some simple chromatic ideas. Easy to play, and great for medium-pace solos (the effect gets lost when shredding).  This can really help open up a whole new world of sound and expression.

Knowing how to play the Am pentatonic scale, and where the intervals are in it,  mainly in first region (tonic located on bass, 4th, and treble strings).  As a reminder (click to enlarge) …

How to add chromatic notes to the minor pentatonic

This post will demonstrate some licks using that old work-horse, the A minor pentatonic scale (1, b3, 4, 5, b7) with some very simple note-choice concepts for what to apply the  chromaticism to, that you quickly add into your arsenal of vocabulary to improvise with.  You’ll also learn about a picking technique, known as swing picking, for making these licks have a better feel than picking every note.

If you don’t have a good feel for the on- and off-beat, then this post should help with that, also.  Chromatic notes are ones that are not scale members.

Here is the original recording I made to help a friend of mine on soundcloud.  Below are listed the times for you to find each lick (and tab) within that audio track, which you can download, if you need to slow it down, practise it, and so on.

Awareness of the on- and off-beat

This is one skill that cannot be over-estimated. Note placement in time (against a rhythmic background) is fundamental. If you are not sure about what on- and off-beats are, then take a listen to the beginning of the audio track (from 0:00 to 2:19).  The metronome is your friend here.  I recommend using apps, for more flexibility here.  Soundbrenner provide a pretty cool one.

This technique produces a very cool sound. I use this with rock, metal, jazz, and blues.  It’s not essential to use, but you should definitely check it out.  Here’s how to do it…

Always pick the off-beat when playing notes on the same string.  Sound the on-beat by hammer-on to it, pull-off to it, or slide to it.

If the first note on a string is an on-beat, then either hammer-on to it or pick it as well. While picking on the same string, change direction each time you pick. When changing strings, use whatever approach you normally take with picking (for choice of up-stroke or down-stroke). I use economy picking (take the shortest route to the string).

Finally, rather than playing each note for equal duration, experiment with lengthening the duration of the note played on the on-beat, and start the off-beat slightly late, lengthening its duration. Ensure the on-beats occur on time.  This is how jazzers create the swing feel that grooves along so well.

If you find yourself wanting some more colour or note choice to add to your pentatonics, and actually to any of existing toolkit of scales, arpeggios and so on, this may be just the job.

I’m a big fan of pointing out that any note can be used against any chord, as far as today’s music is concerned. For today, I don’t want to get into discussions of which intervals sound edgy or not, and am just going to give you a few guidelines to let you make up your own examples. Hopefully you can adapt the licks below.

All we are going to do is make use of pitches that are a semitone either side of a scale pitch. If either (or both) of these neighbours are missing from the scale (which is always the case with the minor pentatonic), then that neighbour pitch is known as a chromatic pitch.

Danger! Two things you don’t want to do (mostly)

1. Don’t end a lick on a chromatic pitch. The last note of a lick is very prominent as it is followed by silence, and hence you want to use a scale note.

All the examples use the A minor pentatonic as the basis, and the chord progression is Am7 – C – D.

The first example just places neighbour chromatic pitches either side of each scale member in the A minor pentatonic scale. Most often, “correct” advice says “don’t play a major 3rd against a minor 3rd” and “don’t play a maj 7th against a b7”. But this can be done to great effect. Listen from 3:54 to 4:28 on the audio track. Here’s the tab.

The next example (starts at 4:45 to 4:55) is again just adding neighbours, mainly around the 4 (D) and b3 (C). As a result, the 2 (B) got added (I didn’t consciously add the B by knowing it is present in the minor scale (A Dorian) that suits this chord progression). But then I re-approached the B chromatically, as it sounded good. Notice I started on a scale note on the beat and ended on a scale note. Also, notice the effect of using the b6 (F) in the 3rd bar, 3rd note in the bar (on the beat), to make it stand out more.

The next example brings the maj7 interval (G#) into focus, on the on-beat (7th note in the first bar). This is a great sound, that is seriously underused by rock players. The choice of F# in the lick comes from A Dorian (F# is the 6 of Dorian, it’s defining interval). Check out 5:01 to 5:06

Next (5:25 – 5:35) is similar to the previous example, with the last bar of the lick reverting to just using A minor pentatonic.

So, hope this gives you some ideas for using chromaticism, and swing picking. See you next time. Have fun!