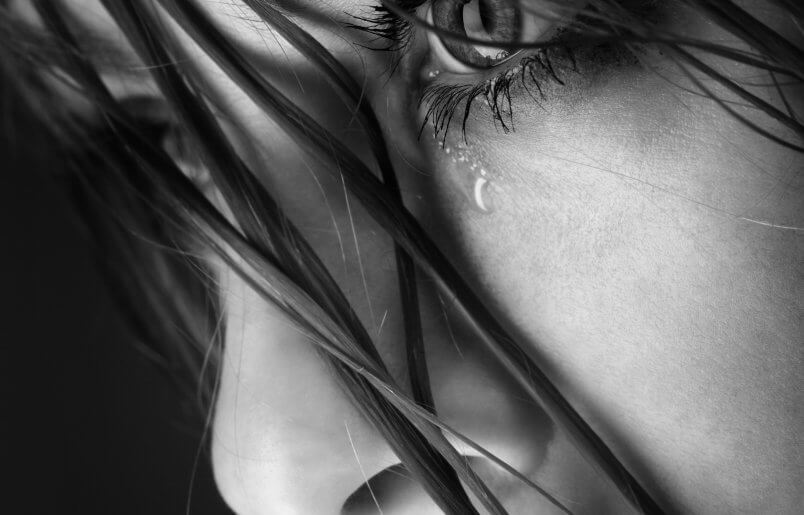 This post takes a look at the minor system, and the tone tendencies of the natural minor (aeolian) scale .  After reading this, you should have a reasonable idea of how to use (resolve) both scale notes and chromatic notes in a natural minor scale melody (and by implication how to handle these when they occur in chords).

This post includes emuso interactivity.  If you  read this blog in emuso, remember you can click on the eye-ear icons below , and on chord and scale images, to go interactive.  Remember, for a scale shape on “guitar” or “piano”, hover over a scale note, with the ALT- key held down, to hear the chord from that root (and use the “generated chord compexity” widget to select from triads to 13ths).  If reading via your browser, on mobile, and so on, this does nothing.  Also remember emuso only plays whatever pitches are visible on “guitar”, so you may want to use the “.” (full stop) and “,” (comma) keys to move the scale shape to another region, where all the scale members are visible.

The vast majority of Western music is based on the major/minor system.  The major system uses the major scale for its music mainly, though non-scale notes are snuck in, in a few different ways (typically adding chromatic notes into the melody, or changing some notes in scale-derived chords by chromatic notes, or by inserting chords whose roots are on chromatic notes).  These all add more spice to the mix.

The 5th scale member of this scale forms a perfect 5th with the scale start note (tonic).  Chords rooted here (known as the V chord) include the minor triad (e.g. B- is the V- chord of the key of E natural minor) and the minor 7th (e.g. B-7, which is the V-7 chord).  Refer to the images of the chords below, and the labelling of the intervals as you read the next paragraph. 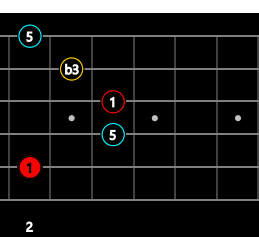 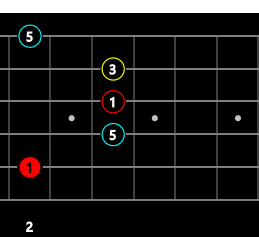 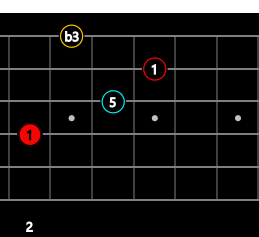 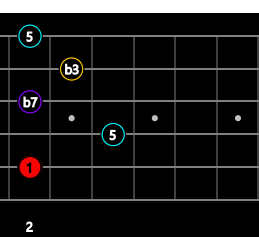 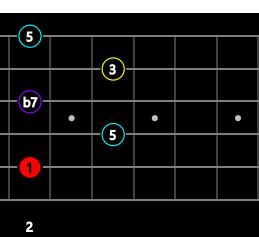 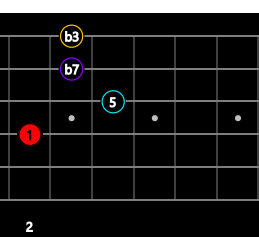 The 7th scale member is located at a b7 from the tonic (look at the scale formula above).

This next example demos this a chord progression using these.  You can very clearly hear the additional pull.

So the next adjustment made, to smooth this gap out, was to replace the b6 by a 6.  This made melodies less angular, but still had the 7 present, so that the V chord still had lots of pull back to I.  This scale is called the melodic minor, as a result.

Notice that the 5th, 7th, 2nd and 4th members (involved in the V chord) of both the above scales are located at the same intervals from the scale start note … so the seventh chord (V7) is the same in both cases.

In classical music, the above was typically used for creating ascending melodies.  So the scale was called ascending melodic minor.  But, when the melody descended, they changed the 7 back to b7.  This scale (1 2 b3 4 5 b6 b7) is of course, the natural minor scale.

However, in modern music, and especially jazz,  the ascending melodic minor scale was used in both directions.  It is a beautiful sounding scale. It is often called the jazz minor scale, or JM scale for short.

A section of music, or maybe the entire piece,  is typically made up of notes from a specific key.  A key is defined by the scale type used, and by the start note choice for the scale (the tonic).   For example, the music may mainly use the notes from key of E minor (natural minor), maybe with a few chromatic (non-scale) notes.  Different notes from the key get more emphasis to bring out the sound flavour of the key.  But chromatic notes may also be used, though with little emphasis usually, so they don’t stand out too much to the listener.  Rhythm plays a large part here, too, for emphasis, but we’ll ignore this here.

In any melody based on minor, the notes that get the most emphasis are those of the minor triad, built off the chosen scale tonic  (so, the Em triad, in the key of E minor).   This is because the Em triad is a very stable sounding chord, from which a chord progression can move away (to less stable sounding chords in the key of E minor) and come back to.  Emphasising the notes of the Em triad both makes the key centre clear (E), and also makes it clear that the tune has a “minor” flavour to it  (any scale with a minor 3rd above its tonic has the capability of creating a “minor” flavour … the precise flavour (such as aeolian or harmonic minor or melodic minor)  being dictated by the other scale notes present)

All three minor scales in the minor system require intervals of a minor 3rd (3semitones) and a perfect 5th (7semitones) made with the scale tonic.

Notice I said “capability” above.  If the notes aren’t emphasised correctly, then the listener may become aware of a different key.  For example, if the tune mainly uses the notes of the G major triad (which are present in the E natural minor scale), the listener will probably hear this tune as being in G major, not E natural minor!!

The idea is that the replacement tone (the one that follows) reduces, or even removes, the level of expectation the listener was in due to the first tone.

You can get a sense of the expectations present in the tones of the aeolian scale, by playing an arpeggiated  E minor triad , followed by each scale note in turn, from which you can judge how much that scale note needs to resolve to another scale note.  An example of this is tabbed out below.

Here is this same example as an emuso snappet.  Press “Start” on Rhythm-X to play it and again to stop it.

When you listen to the above, the most obvious (strongest) tone tendencies are for the  b7 to resolve up to 1, and especially for the b6 to resolve down to the 5.  b6 is very unstable in E aeolian.  Whereas the notes of the tonic triad (1, b3, 5) don’t really create any expectations … they are stable tones.  Though the ultimate resolution would be for both the b3 and the 5 to resolve to 1.

Chromatic tones are all unstable.

A chromatic tone typically wants to resolve down a semitone, when that chromatic tone itself has been approached from above.  In music notation, that tone is shown as a flattened version of the scale note preceding it (for example, we have B, Bb, A).

It wants to resolve up a semitone, when that chromatic tone itself has been approached from below.  In music notation, that tone is shown as a sharpened version of the scale note preceding it (for example, A, A#, B).  The next diagram shows this using the dark blue circles with the name including b (flattened) or # (sharpened).

If a chromatic tone is jumped to, rather than moved to by a semitone, then the preferred resolution is the nearest, least unstable scale tone.  For example, jumping from the 6 (C#) down to the #4 (A#) resolves up to the 5 (B), which is far less unstable (actually a very stable tone) than the 4 (A) … which would then itself probably need resolving down to the 3 (G#).  Try this …

This next diagram summarises  tone tendencies for the scale members 1,2,b3,4,5 when creating music based on the minor system  Remember, these exact same tendencies are present in the harmonic and melodic minor.  Click on it to enlarge it.

NOTE:  THIS DOES NOT MEAN THESE RESOLUTIONS MUST BE OBEYED (oherwise music would be pre-ordained, which would be a nightmare)

And here are the tone tendencies specific to aeolian.

Also note that when these tones appear in chords being used with the melody, the same same tendencies are present, which is why the V chord, a major triad, same as the I chord, has much more drive, setting up the I chord, resolving the 7 and the 2 in the V to the 1 of the tonic triad, as a very strong resolution.

Here is the resolution from 4 to b3 in E minor.

Here is the resolution from chromatic b7 to 1 in E minor.

This next test asks you to adjust some tendency tones in E minor, to remove the tensions as much as possible.  Hint. Think where the most stable nearest tones are.