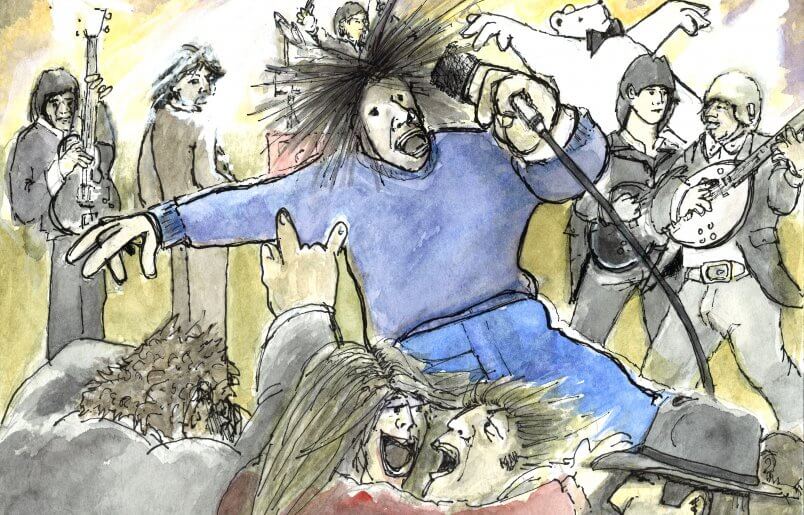 If you are a beginner to chord types and scale types, don’t worry.  You’ll still be able to make chord progressions with this guide.

You could manually use the Toolkit “Chord” menu to choose the next chord, along with any of your edits to the chord (or make up your own entirely), and load (imprint) this into a Rhythm-X part.  This is tedious.  Instead, you can make use of automatic chord generation.  Additionally, any chord can have its notes reorganised (inverted) by typing a character on your keyboard, often with surprising results.  When working with a scale, you can select notes for a melody, and use “scale-aware” inversion.  These are all presented here.

First, you will see how to invert a (part of a) chord, higher or lower.  This can be applied to any auto-generated chord as well. We’ll then carry on with the final version of the snappet from Exploring rhythm #2.   You will see how to turn on automatic chord generation and use emuso>Show scale row for autochord to give you a visual reminder of where (string and fret) the scale notes are located on the “guitar”.  Once turned on, when you CTL-left-click on a scale note location, or left-drag the anchor, the appropriate chord type is built from there.  You will then learn how to choose the chord complexity, resulting in a chord that contains from three to seven different scale notes built around the scale note location.   However, some chords may not be generated  at that complexity if that chord would sound clashy.

Finally, you will learn how to take a melody based on the scale notes, and “invert” them using a “generic interval”.  All will be revealed below!

An inversion of a chord is a rearrangement of its notes.  Here is an example chord.  The red circle labelled “1” stands out to our ears.   Let’s check it out. 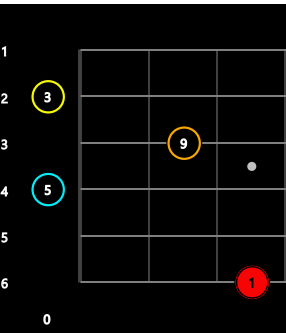 You can also select some of the notes in the chord, and just invert these…

Make sure you you exit the Toolkit, if you are currently in it. Now load up one of the snappets that you encountered in RhythmX #1. You are going to replace some of its chords using auto-generated chords.

You can hold down CTL and SHIFT keys, with a number in the range 3 to 9, to change what emuso does when it generates chords, such as with autochord, or when holding down the ALT key while moving the mouse over a scale note.

Don’t worry if you don’t know what we mean by triads, sevenths, ninths, elevenths, thirteenths, quartal triads and quartal sevenths for chords.  You’ll learn about these in lessons.  But you will hear and see what happens!

All of these can be inverted using Left Arrow, Right Arrow, Up Arrow and Down Arrow.  These can all be left-dragged as well.

You can use this approach for creating practice regimes with position changes along the neck.

The next quick start looks at transposing tracks in Rhythm-X. You’ll learn how to add “memos” to tracks, which are visual reminders of some shape you want to concentrate on while the tracks play out. These two features are especially handy for practicing. You’ll also learn how to time-displace tracks for interesting rhythmic effects.